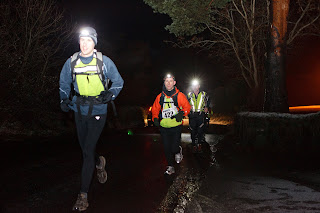 Amazing event. Around 100 runners departed Dublin Castle at 2am through the streets and out of town. The road on higher ground was slushy packed snow from the 400 walkers that left at midnight. Took it real steady to avoid over doing it too early but was feeling good on the steepest part of the hill and pushed the pace a bit. After 15 miles of road, Kippure House was the first checkpoint. I had some soup, snickers, changed my top layers and filled my pack with more gear. I decided to keep going in running shoes and my feet felt good so I didn't change socks.
Leaving Kippure House there were about 15 hikers and runners ahead of me. I could see their lights heading up Ballinabrocky and eventually caught a group at the top. My feet were totally soaked from bog at this point but not cold. With the help of GPS, I eventually found the trail down and then back on to the road for a few miles. The fog was thick now and there was a slight tailwind so it didn't feel too cold probably about -2C. I caught and passed one runner climbing up to Ballynultagh Gap. There was a checkpoint there and the guy told me there was 4 in front of me, but the fog was too thick to see any lights heading up Black Hill. The trail up Black Hill was easy to follow the lower part had some big puddles that were iced over. There was an inch or 2 of freshly fallen snow so I could see the track of the others. I broke through a few puddles and got soaked again but feet were still ok. After the summit of Black Hill, it was onward to Billy Byrne's Gap. The trail disappeared and the fog was thick so I relied on the compass and GPS and headed through the frozen bog. I found the gap and then dropped down eventually out of the fog and headed to the lights of Glenbride village. I got a little lost amongst the houses and had to jump over a couple walls. Then I found the grassy trail down to the road.
At the Ballinagee Bridge checkpoint I had a cup of porridge and a Redbull. The guys told me that I was in 2nd place. I headed across the road into the forest and onto good fire road leading to the river. There was a faint wet trail heading up the river and it started getting light out. I could now make out the ridge line on the right so I crossed the river and headed up toward the ridge. As I went back into the cloud, it started snowing and the temperature was dropping. The wind howled over the ridge and the terrain got nasty as I headed toward Three Lakes. Huge tussocks and deep bog gully's filled with snow and ice. I was watching for the lake on the right, but then spotted it on the left. I overshot it. I came around it and got really disoriented. I came across some fresh tracks which had to be Eoins but they were going the wrong direction. I was heading back north. Dangit. I turned around and kept going constantly checking the compass. Eventually I hit the Avonbeg river. Following the river was harder than I thought it would be. The river banks were steep and snowy. Finally I could see the Table Track, got onto it and headed down the Glenmalure Valley. I only saw 1 set of footprints so was pretty confident I was still in second. The last 2 miles were long and really icy but the sun was rising through the mist at the end of the valley. Amazing. I finished 18 minutes behind Eoin.
Posted by Tim at 3:59 PM