I arrived in Denver from Stavanger on Tuesday night, after 24 hours of travel and 4 flights.  I got up to Leadville on Wednesday afternoon.  When I signed up for Leadville, I imagined spending a couple weeks camping at elevation so that I'd be nicely acclimated to race, but getting there on Wednesday was the best I could do.  Thursday and Friday I really just focused on recovering from the travel and poor sleep, relaxing and reviewing the course and aid stations.  I tried to maintain my jet lag, going to bed at 8pm and getting up as late as possible which was around 4am, the time that the run would start on Saturday.


Almost all of my training for the Leadville 100 was on very rough, rocky, steep muddy trails East of Stavanger or roads.  Leadville's trails are long, non-technical, gradual climbs and descents.

Because I didn't get any training at altitude, or on any big peaks, and only a few days of acclimation before the race, this really was the first race in a long time that I just wanted to finish and didn't care about my time as long as it was before the 30 hour cut-off.

I woke up at 2am on race morning and ate plenty of oatmeal.  Keith and Dad joined me at the 4am start which was pretty exciting, about 40 degrees, calm and clear skies.  The gun went off and the combination of nerves and a gently descending dirt road section made it challenging to keep is slow.  The turquoise lake trail was amazing.  At several points you could see headlamps lighting up the shoreline along the trail ahead and behind.  After a few miles, the trail got a little rougher and I was caught behind a few bottlenecks.  I didn't make any effort to pass anyone as I didn't think it was worth the effort so early in the race.  It got light enough to turn off the headlamp a couple miles before the aid station.  Coming into Mayqueen aid station (mile 13.5) was great with lots of people cheering.  I actually ran right by the tent with the food and once I realised it, didn't want to back track so I kept going which felt pretty dumb.  Skipping the first aid station was not part of the plan.  I still had enough fluid and a couple gels so I just went for it.

The steady climb up sugarloaf pass felt great.  I passed a lot of walkers here and was eager to see Quimi, Carolyn and Mato who were snapping pics around mile 17 near the top of Sugarloaf Pass.  I also hoped to get some drink from them.  Thank you Carolyn for giving me your breakfast.

The next several miles were uneventful and nice.  The descent down Powerline felt great to stride it out a bit.  The road section was fine.  I took the opportunity to talk to other runner which helped pass the miles.  The Colorado Trail was really nice and I could see why some people say this is their favorite part of the course.  Great trail through the forest and very runnable.

Coming into Twin Lakes (mile 40), I was energized knowing I'd see my crew, and happy that the first 40 miles were behind me with no issues.  I was also really excited to finally meet my new nephew, Henry, for the first time.  Twin Lakes didn't dissapoint.  I ate lots of watermelon and pretzels, found my crew, hugged Henry, grabbed my poles and headed out. 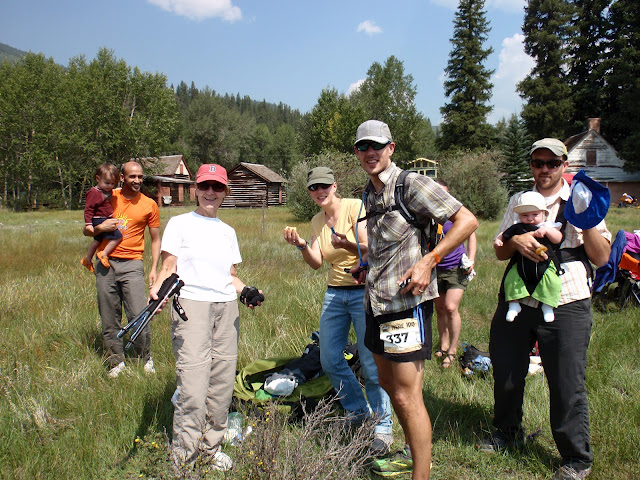 Climbing Hope Pass the first time wasn't bad.  I got in with a couple others who were nice and steady.  Above about 11,500 ft, I was feeling pretty sluggish from the altitude which I expected and knew I had to take it real easy for the miles ahead.  Again I was excited to see Q&C atop Hope Pass taking pictures.  At the top I tightened my shoes, hugged Mato and headed down the other side.


Cruising down the pass was great.  My legs were feeling strong although my pace down was pretty slow.  At the bottom of the pass, my Dad was waiting.  He was hanging out ready to pace me up Hope Pass the second time but first I had to get to and from the Winfield turnaround.  The route turned onto the new Continental Divide section, avoiding the dusty road below.  This was a great trail, but a little disheartening as it climbed slightly with lots of rollers and added about 0.8 miles each way.  I couldn't really find a rhythm on this trail and had to walk a lot, then I started to feel bad for the first time of the race.  I think the effort over Hope Pass had taken its toll and I hadn't done a great job of eating.  I was feeling worse and worse and just focused on getting to the aid station.

I shuffled into Winfield, trying not to think about the fact that most people drop there.  At the aid station, there was a mandatory weigh-in to ensure runners were drinking enough.  I got in line which moved quickly and when it was my turn, the electronic scale stopped working.  The medical volunteer did her best, stomping and kicking it while staying calm and giving me some reassuring words.  I think I looked pretty sad.  Pretty quickly, they got another scale in and I weighed in at 154 lbs.  1 pound heavier than pre-race weigh-in.  This made me feel a little better knowing I had been sipping well for the first 50 miles.

I found a seat in the food tent which was my first time sitting all day.  I could only stomach a few pretzels and half a cup of coke.  I tried a peanutbutter and honey sandwich but it wasn't happening.  I sat for a few more minutes and knew I had to just get up and keep moving.  There was a climb out of Winfield which I knew I'd be walking so I took my time and just tried to pull myself together.  The crowds of people were great but there were a few cars congesting the road and the fumes made me kind of nauseous.  Getting back onto the trail, I saw a few familiar faces of other runners that I had met earlier in the day and most of them didn't look great either.  About 10 minutes out of Winfield, just about as quickly as I deteriorated, I suddenly felt better.  Wow, I was getting a second wind.  Within a couple more minutes I felt amazing and was running again.  Now I was loving the new trail, cruising along and actually looking forward to climing Hope Pass with my Dad.

My Dad was still waiting ready to go.  We took it really steady as we were heading up the steeper side of the pass.  My Dad's company was great.  He was pretty out of breath on the lower steeper half, but then seemed to get stronger as we went up.  Near treeline it rained a little, but nothing serious.   I started suffering again for the lat 1000 feet or so and just focused on getting to the top.  The top was cold and windy now.  I put on my jacket and headed down.  I just wanted to get to the llama aid station and get some warm soup.  I got in there and found a nice seat and sipped a whole cup of soup.  This was the first of many cups of soup that were like magic potion.  I tried a few M&M but they actually weren't good.  Too sweet.  Running back down, I found my Dad again who passed me while I was sipping soup.  We just had a few words and I kept going.

Arriving at Twin Lakes the second time (mile 60), I was so excited to hear that Murtaza had decided to pace me for the next section which was going to be tough.  A big climb out of Twin Lakes then the darkness.  This section went well and I settled into a fast walk which felt pretty efficient although I wasn't running much anymore.  I started feeling low again before the Halfpipe aid station, but some soup there, and I was getting my third wind. 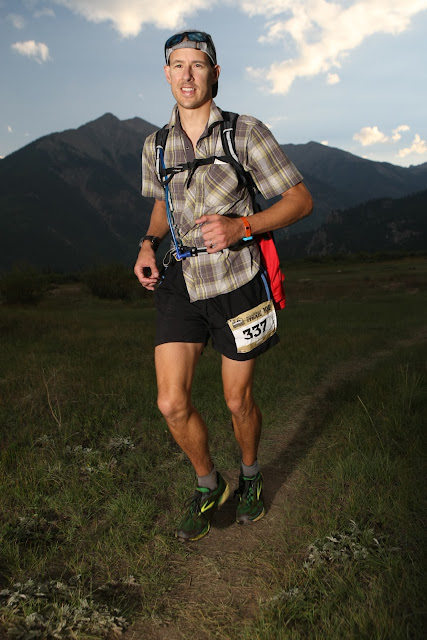 At Treeline (mile 72), my crew was waiting.  Murtaza stopped here and Sara took over.  We started out walking, but before I knew it, Sara had us running again.  Sara was great, keeping my brain going, the road miles passed quickly.  We ran most of the road section and enjoyed an amazing cup of potato soup at Fish Hatchery aid station.  It was now close to midnight.  We ran down the final hill where my crew was waiting, and where Sara would finish and Keith would begin.  Hopefully the next time seeing them would be at the finish.

Keith and I headed up the Powerline climb.  I was feeling pretty good and we were talking quite a bit.  We kept a steady pace for the long seemingly endless climb.  Getting higher, it got cold and exposed.  The climb was long but we kept moving.  We had all our clothes on as it was probably dipping into the 30's.  Toward the top I started feeling pretty low again and could only think about soup again.  The rough trail cutting across to Mayqueen was pretty ugly.  I was using the poles a lot just to keep me upright.  Mayqueen was a feast.  2 cups of soup, a cup of coffee, some chips and pretzels.

Heading out of Mayqueen I was feeling really good.  I was pretty confident we were going to make it and knowing the sun was going to be rising soon gave me a boost.  We kept a pretty decent walking pace around the lake and picked up Rebecca with about 8 miles to go.  The 3 of us hit the road with 6 miles to go and started passing people like crazy.  These last miles were so much fun.  With about 1 mile to go my Mom ran out to meet us.  We ran down 6th street feeling great, finishing in 27 hours and 53 minutes, just before 8am on Sunday.

Next time, have pacers bring a small flask with hot soup in it and sip it regularly.  It was amazing how quickly I would feel better after soup.  If I could have kept topped up on soup, maybe I wouldn't have had as many lows.

I couldn't have done it without my solid crew and pacers, Mom, Dad, Sara, Tina, Keith, Kyle, Doug, Murtaza, Rebecca, Quimi and Carolyn.  Thanks. 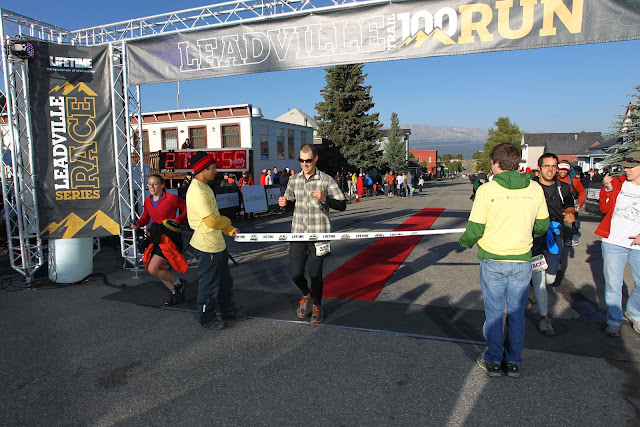 Here's my GPS data for the entire route.